Perhaps it was images such as these that might have left some with the notion that Australia wasn’t really getting all that much hotter afterall. 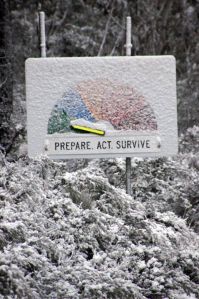 Melbourne for one experienced its coldest winter in 26 years.

Did this cold winter, a deniers of global warming might argue, explode the myth that has been perpetrated by a conspiratorial group led by the United Nations who are attempting to impose world government on us all?

Chair of the Australian Prime Minister’s Busniness Advisory Council Maurice Newman certainly thinks this is what it’s all about. Back in May he caused a storm of embarassement, even for the Abbott LNP government with it’s history of global warming denialism, with his piece in the Australian Newspaper of May 8.

Some of the points that came out of his article were:

Perhaps the best way to unpack these peculiar claims is with expert advice.  Most of them are dealt with in the following Australian Senate enquiry.

If NASA’s claim that 2014 was the warmest year on record was revised, after challenge, to only 38 per cent probability, it’s news to NASA. Let this video clip speak for itself.

Bureau of Meteorology on winter 2015

Winter was a warm season for most of Australia, but cooler than average for much of the southeast.

Maximum temperatures were cooler than average for much of southeastern Australia although average to above average in eastern New South Wales.

The national maximum temperature anomaly for winter was +0.83 °C, the equal-eighth warmest on record.

Maximum temperatures were above to very much above average over Western Australia and the adjacent margin of South Australia; for an area of the western Kimberley winter maxima were warmest on record.

Maximum temperatures were below average for most of New South Wales inland of the Great Dividing Range and away from the Queensland border, most of Victoria except the far northeast, southeast South Australia, an area extending from the Eyre Peninsula through the Riverlands, and nearly all of Tasmania.

Winter minimum temperatures were also above to very much above average for most of Western Australia and Queensland, except for parts of the northern Kimberley and the Cape York Peninsula. Minima were also above average for western and northern South Australia, parts of northern New South Wales, parts of the south and west of the Northern Territory and a pocket of the southwestern Top End. J

For winter as a whole, minimum temperatures were below average for central Victoria and South Gippsland, parts of the southern Riverina and South West Slopes districts in New South Wales, and also for an area of the South West Slopes in New South Wales, parts of the northern agricultural districts in South Australia, and an area of the northwestern Alice Springs District in the Northern Territory.

Indeed, winter was a warm season for most of Australia.

How to assess the temperatures

This is the most important issue in the entire discussion. In a recent scientific paper Sophie C Lewis and Andrew D King point out that there is a Dramatically increased rate of observed hot record-breaking in recent Australian temperatures.

They show us that the number of new hot (high maximum and high minimum temperatures) temperature records have increased out numbering new cold records by a ration of 12:1 on average.

Read the original article in The Conversation. One great point made in the article was its simple explanation of Prime Ministers Abbott’s failed logic on the matter. Back in 2013 after a particularly hot spring with bush fires he was reported in the Guardian as saying:

And the thing is that at some point in the future, every record will be broken, but that doesn’t prove anything about climate change. It just proves that the longer the period of time, the more possibility of extreme events … the one in 500 year flood is always a bigger flood than the one in 100 year flood.

This is statistical fallacy because: In an unchanging climate, new temperature records actually become less likely to occur with time, because each new record would be harder to beat in the absence of anything driving temperatures in a particular direction.

Beyond Borders: conversations across boundaries