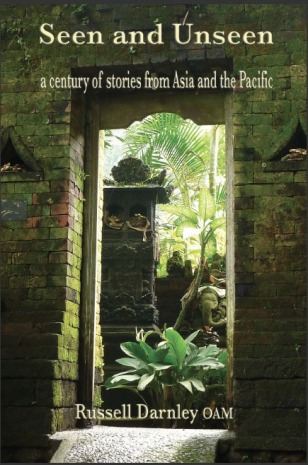 The book is now available for purchase from IP Sales as hard copy or as an eBook. It’s also available through Amazon and iTunes.

Russell Darnley OAM, author of the recently published Seen and Unseen: a century of stories from Asia and the Pacific, explained that what prompted him to write was an act of terrorism.

“It was a beautiful balmy night on my veranda in Ubud,” said Russell. “When strange thunder rumbled from the south, conversation paused. It was a prelude to what was to come.”

“I woke to news of the Bali Bombings and being an Indonesian speaker I thought I might be useful, so I made for Bali’s Sanglah Hospital. What I saw and had to deal with was way beyond my previous experience. Over the next three days I was forced to draw on every ounce of my physical, emotional and spiritual resolve.”

“I learned that in such traumatic times the healing that follows can provoke deep insights into the very nature of our humanity, into the fundamental realities of life and death.”

Russell was awarded the OAM for his voluntary work after the bombings. “As part of my own therapy I started diarising the events and then as the pain eased I found I’d unlocked a creative desire to keep going,” Russell explained.

The 29 short stories in Seen and Unseen were inspired by his family’s experience spanning three generations of living and working in the region. The book blends anthropology, botany, ecology, economics, geography, history, politics and spiritual traditions.

The stories are chronological and incremental. They begin in 1914 with his grandfather Sid Thompson, a member of the little known ANMEF Australia’s first WWI expeditionary force confronting malaria and dengue in New Guinea.  Sid Thompson also appears in ‘Red Poppies and Janur’. Several stories address changing Australian views of Japan through the encounters with ordinary people. ‘Joss Sticks and Cracker Night’ and ‘An Encounter with White Australia’ reveal Asian influences in Anglo-Australia of the 1950s. ‘First Landfall’ and ‘The Sublime to the Horrific’ chronicle Russell Darnley’s own first bumbling attempts at adjusting to life in Asia.

Half of the stories are set over an 18-year period in Indonesia contrasting the comforts of urban life with the ruggedness of forest life. Some engage with major cultural differences while others deal with matters of more global significance.  ‘Campaign’ and ‘The General Election’ are on the ground stories taking two Australians and Indonesian friends through Indonesia’s transition to democracy.

‘An Unusual Kind Of Thunder’ and ‘In The Charnel House’ deal directly with the Bali Bombings of 2002 while ‘My Second Meeting With Jonathan’ unfolds later as Russell meets the family of a young man whose body he identified and whose brother is now the UK’s Foreign Minister.

Influencing Russell’s work is an idea that interactions with people from our own culture are generally tangible and familiar, but when we move beyond the familiar, meaning and understanding must often be carefully negotiated. Another influence is the Balinese belief that reality is an interaction of Sekala (The Seen) and Niskala (The Unseen).

Russell is now living in Singapore. Previously he was based in Indonesia for 18 years where he operated a field study centre and worked as a consultant to the Australia Indonesia Institute. He will be in Australia from 22 February and is available for interviews until after his Sydney book launch on 14 March. Contact Russell on +6597168151 or in Australia on +61417238199

3 thoughts on “Seen and Unseen: A century of stories from Asia and the Pacific.”